We successfully wrapped up our Love Project in Pensacola, FL this past weekend. It would be an understatement to say that it was just a success. While only a five day fundraising project, through the generous donations from many of you all, H4AD was able to distribute 41 Compassion Kits to various homeless people throughout the Pensacola area.

The cost of each Compassion Kit was right at $10. The kits included a sandwich, bottle of water, pair of new socks, chips, toothbrush, toothpaste, two granola bars, gum, and a $5 gift card to a fast food restaurant to purchase a future meal. So, for just $10 – probably what a lot of us spend on one single lunch on any given day – a very needy person was given several meals, hygiene products, and a fresh pair of warm socks. Most of all, the homeless folks were given a dose of friendship, some much needed love, and hope.

There are too many stories to recount in this news post, so we will highlight just a few. We were able to drop off several Compassion Kits to a local homeless shelter in Pensacola, FL. They were so thankful to receive the kits, as the shelter seems to always run out of necessities to give the homeless. The kits were a perfect match to the numerous homeless that visit the soup kitchen and shelter and are in need of something impactful from the shelter. 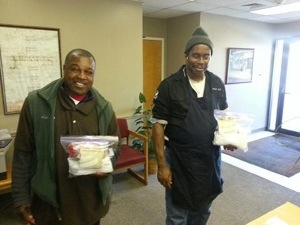 One distribution team on the streets met “John”. He was originally from Texas, and has been homeless for three years. John was extremely thankful for the package. The distribution team was able to pray with him and be an encouragement to him. John gave directions to a nearby camp where other homeless men were located. The same team made their way to that camp and met more homeless there. One particular gentleman that called himself “Tebow” recounted his homeless experiences and journeys. He was originally from Washington State and lived day to day by “flying his sign” from town to town. He was recovering from a stab wound in the back from two weeks prior! Amazingly, when Tebow saw the packs, his eyes just lit up. “Are those socks? Man, I am in the need of some socks really bad. This is so great!”

If all we were able to provide were socks, the Love Project and Compassion Kits would have been worth it all. We have other stories to tell. We met a gentleman who called himself “Mad Dog”. We discovered a community of homeless in a section of Pensacola called “The Island”. Needless to say, the opportunity for future service remains great.

We could not have done it without you! 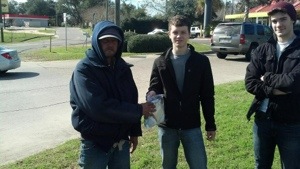 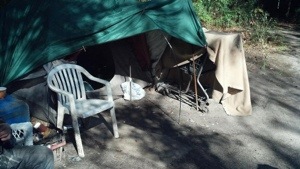 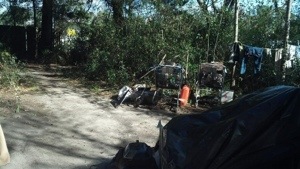 "100% of your donation goes directly to the project"